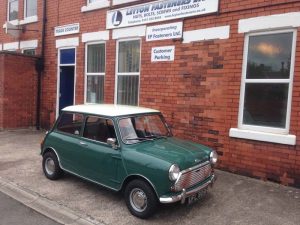 In 2014, after owning the Cooper for the last 30 years, I had decided that it needed a thorough restoration.  Having restored it in the early 1990’s there were the usual mini issues, such as boot floor, “a”panels, front panel etc.  The floor, subframes and doors and boot were fine, although everything had started to look very second hand, with rust breaking out everywhere.

First job was to strip it back to the shell and sort out the boot floor area, surprisingly the subframe mounts were still in good condition, although the front subframe needed replacing.  On the front frame, when the car had received its first restoration, I hadn’t checked the front frame for accuracy….however on taking measurements, this time around, it was clear that this frame was very twisted.  As luck would have it I found a good second hand early 1960’s subframe on eBay, the early Mini frames were solid mounted, with no rubber mounts.  The later rubber mounted Mini Subframes are much easier to source.  They arrived in the 1970’s with advertising from BMC as the new quiet Mini….to be honest, they were just as noisy as earlier ones.  The early frames mount direct to the front panel and front floor with bolts (supplied by Leyton).  We used zinc plated unified bolts with large (penny) washers to spread the load.  The frame was sent away fro shot blasting and powder coated in black, to add to durability.

Next job was to refurbish all components removed from the Mini, we had already decided to change all brake parts for new items, given the ones taken off were original, apart from my changing the brake pipes to cupro-nickel and using stainless pistons in the front brake callipers….although that was in 1986.  The stainless exhaust fitted in 1987, was still in great condition, just very rusty bolts!  We decided to use stainless on the exhaust bolts, rather than zinc plate.