It was never John Lund’s intention to take his Mini off the road, but with the arrival of his first company car and an impending MOT on the old girl (yes, it’s a she) he decided that the sensible thing to do would be store her under cover and attend to whathe thought would be minor issues, as and when time allowed! However, there she sat for two years untouched and unloved until Johns wife bought him a Mini restoration book for Christmas. Note: there was no internet back in the good old days, 1986! 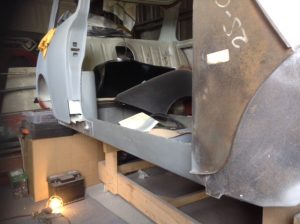 A MIG welder was purchased before totally dismantling the interior and removing the inner cover sill on the offside.   Sheet metal to make the panels would required as in the day, very little in the way of body panels were available, of course you could purchase outer wings, doors, boot and bonnet etcetera from your local BL dealer, but if a top step was required with the correct profile, or ‘A’ post that wasn’t a cover panel. Purchasing a complete side panel from the main dealer was the only option available, and prohibitively expensive!

Hardware, nuts, bolts etcetera were in plentiful supply; how times have changed, everything you could ever want to restore your Mini these days is now available, imperial hardware is a little harder to source however now that we are metric! How times have changed. Leyton Classics to the rescue. A couple of bags of assorted hardware were purchased and these have been invaluable throughout my restoration. So convenient too.

Removing the inner sill revealed far more rust than he could have imagined and as is typical with such extensive rust, the end of the seat box is usually effected too. With the shell braced and supported, out with the cutting disc and spot weld remover, removing the top step, outer sill and lower section of the rear wing and companion box. All replaced with fabricated or new panels where appropriate. And repeat on the near side.

John then turned his attention to the boot area which required repairs to the usual places: battery box, trail edge of the floor and in my case one of the rear wheel arches. With copious amount of measuring and making of various jigs John removed the rot. First to be removed was the wheel arch while he still had something left of the boot floor to position the new one to, followed by the battery box, then came the replacement of the rear valence and closing box sections; sub frame strengthening plates completing the boot floor repair. Having completed both sides of the car (save for the off side sill of course) and boot floor, John could at last turn his attention to the front of the car with the bulkhead requiring only a minor repair before turning attention to the inner wings. 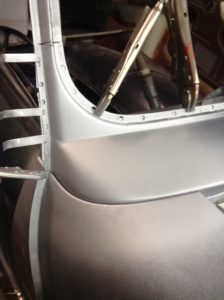 However, both inner wings were rotten, in the main due to poor repairs carried out by a so-called professional. Sourcing a complete off side inner wing at a Mini show (genuine BL MK111 items) and correct for the year, 1971. John wasn’t so lucky with the near- side however and after months of searching unsuccessfully, he purchased a new inner wing from Rover, intended for a MK5 Mini, necessitating the removal of the front section of wing designed for the fitting of an electric cooling fan, then transplanting the front section complete with radiator cowling from his Mini. 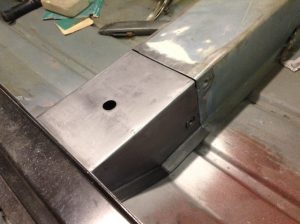 The correct inner wing panel is now available! Fitting the inner wings was a complete nightmare though and not something John would relish doing again. Lots of measuring, clamping the outer wings, front valance, ‘A’ panel, doors, windscreen surround (the old one removed to facilitate fitting of the inner wings, and of course it was rotten in both corners) followed by fitting the bonnet. John spent weeks lining up these panels perfecting a good panel fit. Perfecting a Jaguar fit on a car that was quite literally thrown together by hand in the seventies at the height of production is somewhat rather difficult, however the inner wings are in now in place. That’s pretty much where I am now after 33 years.