Modern Fuel and its impact on classic engines

A couple of years ago I entered my garage, to be met by a strong smell of fuel. On checking the cars, it became apparent that the mini had leaked a fair quantity of fuel from the rear sub frame, where the petrol pump is situated. My initial thought was “maybe its a seal in the pump”, but further investigation showed that both seals and diaphragms in the pump had failed, in fact were eaten away, the petrol hose also look a bit suspect.

Somewhat alarmed, I started to look for answers on the Internet and found other owners of classic cars had seen similar issues and attributed them to the changes in Petrol, specifically ethanol blended into the petrol. It also appears that the composition of modern petrol is very different to the “stuff” many of us will remember from the ‘60’s and ‘70’s. It seems that modern petrol “goes off” if kept for any length of time and degrades, something I’ve seen in my cars when leaving petrol in their tanks over winter. A further issue for some owners is the “hot starting” problem. Overheating and some reports of rough running suggest that this is also attributable to modern petrol.

Over the last couple of years I have bought petrol stabilizer for any petrol left in the cars overwintering and removing all petrol from garden machinery over winter. Both these solutions have worked reasonably well. I have also changed all my fuel lines and electric petrol pumps to more modern items, which can cope with ethanol in fuel. 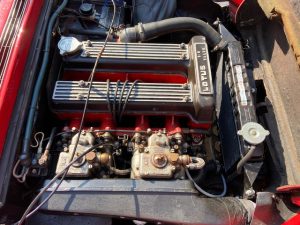 However, I recently read a book by Paul Ireland called “classic Engines, modern fuel. This is as fairly extensive look at modern fuel and its impact on modern engines and is well worth a read, although a little technical. Paul concludes that modern petrol runs hotter with a typical impact on the heat from exhaust manifolds and general under bonnet temperatures. This high volatility is also the reason that modern petrol “goes off” fairly quickly. His second finding is that modern petrol burns more slowly and hotter, often having the same effect as retarding the ignition.

I have certainly had hot running issues, particularly n my Healey, where the passenger foot well suffers, despite having thick insulation. I’ve also had to fit a modern radiator to the Lotus Elan, which always had marginal cooling “in the day” but now needs the extra cooling, particularly in traffic on hot days.

There are a number of changes you can make: